Revelation
Session 10
“Back to The Future”

Last time we closed out with John’s vision of a woman—illustrating Israel—who gives birth to the Christ Child. John also saw a great dragon waiting for the birth so that he could devour the child—which pictured Herod’s edict that all male children 2 years old and younger be killed. But God protected Jesus, who was ultimately caught back up into heaven after his death, burial, and resurrection. This vision took John back into the past.

But now we will see that John is transported back to the future as the narrative picks up 3 ½ years into the middle of the Great Tribulation. The new world ruler, the Antichrist, has suddenly severed his seven-year covenant with Israel, and slain the two witnesses in Jerusalem.

Now Israel, the woman, comes under persecution. Many Jews in that day will flee to “a place in the wilderness,” perhaps even hundreds of thousands of those who still have not received Jesus as Messiah.

John says they will be protected for 1,260 days:

Revelation 12:6 “And the woman (Israel) fled into the wilderness, where God had prepared a place to care for her for 1,260 days.”

Next, yet another shift from earth to heaven takes place as John observes an incredible battle under way:

Revelation 12:7-9 “Then there was war in heaven. Michael and his angels fought against the dragon and his angels.”“8And the dragon lost the battle, and he and his angels were forced out of heaven. 9This great dragon—the ancient serpent called the devil, or Satan, the one deceiving the whole world—was thrown down to the earth with all his angels.”

While the Jews are in flight, Satan is totally expelled from heaven and denied even the limited access he now enjoys as revealed in Job, chapters 1 and 2…He is confined primarily to earth for the final 1,260 days of the Tribulation. Heaven rejoices:

Revelation 12:10-12, nkjv “Then I heard a loud voice saying in heaven, “Now salvation, and strength, and the kingdom of our God, and the power of His Christ have come, for the accuser of our brethren, who accused them before our God day and night, has been cast down. 11 And they overcame him by the blood of the Lamb and by the word of their testimony, and they did not love their lives to the death. 12 Therefore rejoice, O heavens, and you who dwell in them! Woe to the inhabitants of the earth and the sea! For the devil has come down to you, having great wrath, because he knows that he has a short time.”

The dragon is now filled with great wrath. How does that anger manifest itself? He proceeds to energize the Antichrist with supernatural power. Chapter 13 paints an incredible picture of how bad it becomes on our war-torn, sin infected, demon infested planet earth.

Revelation 13:5-6 “Then the beast was allowed to speak great blasphemies against God. Then he opened his mouth in blasphemy against God, to blaspheme His name, His tabernacle, and those who dwell in heaven.”

Daniel the Prophet also predicts that the Antichrist would possess a vile, blaspheming tongue. He describes him as the “little horn” with “a mouth speaking pompous words” (Dan.7:8).

John continues with his description of this vile man Paul the Apostle calls “the man of sin,” and “the son of perdition” (2 Thes. 2:3):

Revelation 13:7-8 “7And the beast was allowed to wage war against God’s holy people and to conquer them. And he was given authority to rule over every tribe and people and language and nation. 8 And all the people who belong to this world worshipped the beast.”

This is what the Bible calls “the time of Jacob’s trouble” destined to come upon Israel. Satan hates Israel because they are God’s elect, and because Israel (the woman John saw) gave birth to the Wonder Child—Jesus Christ!

So Satan releases his wrath on God’s chosen people:

Revelation 12:13-14, “When the dragon realized that he had been thrown down to the earth, he pursued the woman who had given birth to the male child. 14But she was given two wings, like those of a great eagle, so she could fly to the place prepared for her in the wilderness. There she would be cared for and protected from the dragon for a time, times, and half a time.”

Remember, many Jews in that day will flee to “a place in the wilderness,” perhaps hundreds of thousands of those who still have not received Jesus as Messiah. John says they will be protected for 1,260 days:

Revelation 12:15-17 “Then the dragon tried to drown the woman with a flood of water that flowed from his mouth. 16But the earth helped her by opening its mouth and swallowing the river that gushed out from the mouth of the dragon 17and the dragon was angry at the woman and declared war against the rest of her children—all who keep God’s commandments and maintain their testimony for Jesus.” Satan hates all who name the name of Christ. This is likely a prediction of a flood of violent persecution.

The Appearance Of Antichrist

As we begin chapter 13, the Antichrist himself, the dreaded beast, steps onto the world stage. John records:

Revelation 13:1, nkjv “Then I stood on the sand of the sea. And I saw a beast rising up out of the sea, having seven heads and ten horns, and on his horns ten crowns, and on his heads a blasphemous name.”

The phrase, “rising up out of the sea,” is a description of how the Antichrist will rise out of the vast sea of humanity.

The Antichrist is described as having “7 heads.” John tells us later in chapter 17 that “…The seven heads are seven mountains on which the woman sits. 10There are also seven kings…” (Rev. 17:9-10).

The place of seven mountains is clearly Rome. And the kings he mentions are political rulers of a revived Roman empire. (More on this in chapter 17)

Then John also mentions seeing 10 horns. Again, in chapter 17, an angel explains to John what the ten horns represent. Let’s take a peek:

“The ten horns which you saw are ten kings who have received no kingdom as yet, but they receive authority for one hour as kings with the beast. 13 These are of one mind, and they will give their power and authority to the beast. 14 These will make war with the Lamb, and the Lamb will overcome them, for He is Lord of lords and King of kings; and those who are with Him are called, chosen, and faithful” (Rev. 17:12-14, nkjv).

These ten horns likely represent ten nations that will join with the Antichrist in his attempt at world domination, as well as his attacks against the Jewish people and the tribulation saints.

When I think of this ten nation confederacy, it seems highly probable that this will happen either through the United Nations or the European Union.

Again, we will explore this at length when we come to chapter 17.

Last time we closed with John’s vision of a beast rising out of the sea in the thirteenth chapter of the Revelation:

Revelation 13:1, nkjv “Then I stood on the sand of the sea. And I saw a beast rising up out of the sea, having seven heads and ten horns, and on his horns ten crowns, and on his heads a blasphemous name.”

The phrase, “rising up out of the sea,” is a description of how the Antichrist will rise out of the vast sea of humanity.

We saw that the “7 heads” represent the 7 mountains or hills of Rome…He will arise out of a revived Roman Empire.

And the ten horns are ten nations that will give their allegiance to the Antichrist as he seeks world dominion.

John next describes the diabolical personality traits of the Antichrist:

Revelation 13:2, nkjv “Now the beast which I saw was like a leopard, his feet were like the feet of a bear, and his mouth like the mouth of a lion. The dragon gave him his power, his throne, and great authority.”

The animals used to describe him are characterized by the following:

John predicts that his kingdom will be strong and powerful, he will take over quickly (seemingly overnight), and he will be stately, ruling by the roar of powerful words.

The Antichrist at this time will be possessed of the devil like no other human being in the history of the world.

Halfway through the Tribulation, he will commit the Abomination of Desolation we discussed earlier.

He will walk into the rebuilt Temple, into the Holy of Holies, and will declare himself to be God…He IS the abomination that makes desolate!

It would appear that at this time an assassination attempt is made either on him, or on one of the kings associated with him:

Revelation 13:3 “I saw that one of the heads of the beast seemed wounded beyond recovery—but the fatal wound was healed! The whole world marveled at this miracle and gave allegiance to the beast.”

Notice that the Bible says, “One of the heads…SEEMED wounded beyond recovery…”

Satan, the ultimate deceiver, would love to lead the world to believe that his Antichrist is resurrected just like Jesus was.

I believe the Bible may be suggesting that it’s a ruse—It only appears to be a literal resurrection.

The result of this “resurrection” is universal adulation:

Antichrist is now at the height of his diabolical career…He leverages his popularity to commit pure evil.

At the height of his wicked reign it seems as if nothing will take him down as he rides a crest of unprecedented fame:

Revelation 13:5-9, kjv “5And there was given unto him a mouth speaking great things and blasphemies; and power was given unto him to continue forty and two months. 6And he opened his mouth in blasphemy against God, to blaspheme his name, and his tabernacle, and them that dwell in heaven.7And it was given unto him to make war with the saints, and to overcome them: and power was given him over all kindreds, and tongues, and nations.
8And all that dwell upon the earth shall worship him, whose names are not written in the book of life of the Lamb slain from the foundation of the world. 9If any man have an ear, let him hear.”

As Antichrist rides this wave of adulation, John warns that anyone trying to stop his reign of terror will be imprisoned or slain:

Revelation 13:10 “Anyone who is destined for prison will be taken to prison. Anyone destined to die by the sword will die by the sword. This means that God’s holy people must endure persecution patiently and remain faithful.”

The Antichrist will not conquer without the help of a second beast, a diabolical religious leader we will meet next time! 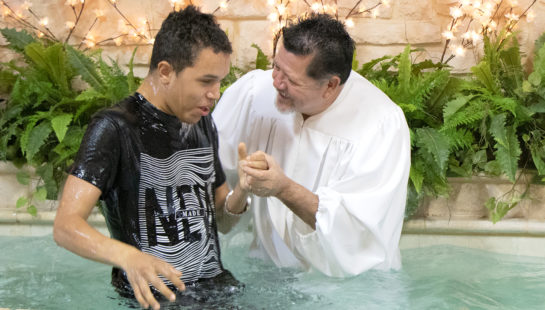